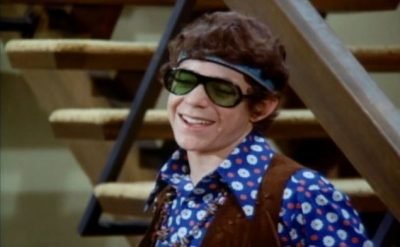 My great grandmother Lorene was a sweet old woman who kept an enormous collection of preserves and jams.  She was all about the jams!  Not the jams bubbling up over the speakers when her favorite wax platter was a-spinning on the turntable.  At least not the sounds the “kids” were listening to; the rock and roll.  She called that “jungle music” – not the most politically-correct woman on the planet.  Her generation was the folks who pumped out the “greatest generation” jams.  She preferred Benny Goodman, Louis Armstrong, Frankie, Dino, Bing, maybe even a little Hank Williams (though she hailed from Nashville, she wasn’t up on country).  If you came into her house and put Sticky Fingers (accurate title) on the player, she’d stick her fingers in her ears and start screaming, and the screaming … would not … stop

That’s the older generation.  The collection of refuse we’ll easily discard today for a stack of invisible digital bits; encoded audio in a series of ones and zeroes, the new samples, the state-of-the-art music.  Can you imagine what she would think of today’s music?  Lorene’s no longer with us.  I believe she was born in 1900, which would make her around 117 today.  Holy-Moley!  She couldn’t handle Elvis or the well-dressed Beatles.  She would call them all, “long-haired freaks.”  She liked it quiet, polite with cello-swirls and a bandleader’s sensible haircut and comfortable wing-tips; Lawrence Welk and Perry Como.  Mick Jagger starts sticking out his tongue and the conversation is over.

In concert with guide tracks and lip-synching, Auto-Tune can turn any run-of-the-mill off-key shower singer into Liza Minnelli, in theory.

There was a fantastic interactive timeline put together last year documenting the meteoric rise of modern popular music as it related to sales and chart action.  This goes back to the late ’50s; you got your Carl Perkins, Elvis, The Supremes, The Beatles, The Bee-Gees, Olivia Newton John, Prince, Madonna, all the way up to now with Adele and Rihanna.  Because this is science, you have patterns.  You can see the trends.  You can hear what was popular, and how the form evolved; bluegrass, rock, and rhythm & blues.  Popular music hasn’t changed.  The technology and the delivery system may have changed, but not the construction, not the appeal, not the marketing of such music.  You have your verse.  You have your chorus (the “hook).  You have your second verse.  You have your second chorus.  You have your bridge.  Rinse and repeat.

Sometimes something will come along that is “fresh”; a “fresh” sound, a new energy.  Early 2000s, the White Stripes come along and everybody’s telling me how “fresh” they are.  Look at their gear.  4-track recorders they dug out of the garbage, recorded in abandoned churches, whatever.  I watch a documentary where Jack White constructs an electric guitar out of a Coke bottle and a piece of plywood in less than ten minutes.  When you know the rules, you can break the rules.  God bless him for all his nutty behavior, but the man is an artist.  The White Stripes beget The Strokes, The Hives, and any other number of D.I.Y. rock bands, and much of the new pop-punk movement

The fifth season premiere episode of The Brady Bunch, “Adios, Johnny Bravo”, has Greg testing the waters of teen heart-throbdom when the kids are spotted by a con-artist talent agent.  She singles out Greg (like they all do, they’re in the business of hunting frontmen), gives him a makeover with sunglasses and jean jackets, and calls him “Johnny Bravo”.  Greg goes in for recording sessions and finds that his singing voice is being manipulated.  The engineers call it “sweetening”.  They hold him captive in a wall-of-sound scenario, and add thick echo to his voice, giving him artificial authority.  Greg is, of course, outraged to learn the very hard lesson that entertainment (music, in particular) is one big phony-train always in danger of jumping it’s over-produced tracks.

Moving forward to the year 1998, “sweetening” is replaced by the concept of “Auto-Tune”.  The brainchild of Andy Hildebrand, “Auto-Tune” was originally intended to be a deceptive spackle that would smooth over the rough edges enabling singers to hit certain notes they could not otherwise achieve in the recording process. In concert with guide tracks and lip-synching, Auto-Tune can turn any run-of-the-mill off-key shower singer into Liza Minnelli, in theory. Of course if it’s worth doing, it’s worth over-doing.  Sixteen years later, nearly every singer and recording artist utilizes this process.  There are a few hold-outs (or perhaps the hold-outs are better at covering their tracks in the final mix).  I assumed that if deception was the name of the game, an engineer (or producer) could conceal a singer’s lack of range, but there is no deception to be found in the final mix.  The deception is revealed later.  The deception is that a marketing team, a publicist, or a talent agent can find a passably pretty or marginally attractive young woman or man, give that person a makeover and an artificial singing career.

Ke$ha comes to mind.  Again, marginally attractive with pink hair; considers herself a singer but relies heavily on “Auto-Tune.”  Her mother was a singer-songwriter (according to the Wikipedia, her mother encouraged her to take up singing when she noticed her “talent”).  She has a guru in the hilariously named Dr. Luke, who owns her lock, stock, and barrel.  I don’t know how that happens.  Maybe she signed a slave contract (not uncommon among the more illiterate “singers” out there).  She loses her name.  Her label drops her.  She begins to rebuild her career.  All of this originates from her lack of talent and the debt she owes to “Auto-Tune.”  My heart breaks when I think of singers who have destroyed their throats and their vocal chords perfecting their art over the many years.  Stevie Nicks lost an entire octave in her voice.  Meatloaf sounds like a dying refrigerator.  Have you heard Paul McCartney lately?  These artists gave it their all in service of their art, and they killed a part of themselves to do what they needed to do.

One thought on “Adios, Johnny Bravo”