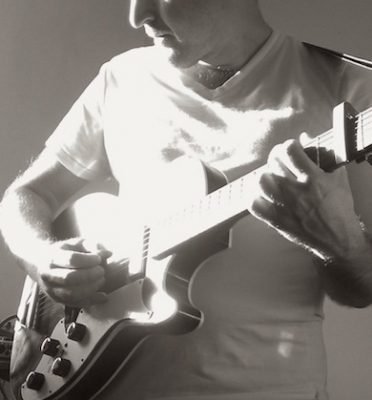 Generally speaking, any album with great songs and electric guitars is one to hear. Guitar players will always fuss over their ‘tone’ to the point where it’s impossible for mortals to detect. The entire world of boutique effect pedals depends upon this. Yet, no matter how much ‘great’ tone you achieve, it means pretty much zero if you don’t have the songs to engage an audience. Students of technique and tone can find plenty of important lessons in the works of virtuoso guitarists, but the general listening public isn’t much interested in hearing technique that makes itself obvious. It’s not for them.

I consider myself a serious, casual listener, meaning I listen to hundreds of albums each year —likely three to eight hours a day. Sometimes on headphones. Sometimes on lousy computer speakers located somewhere in my laptop. I’m not an audiophile. But I know what I like.

This list isn’t intended to be in any way definitive. If it were that, I’d have to give serious consideration to dozens of blues guitarists whose tones are mind-boggling but whose material doesn’t always excite me. In terms of ‘classic rock’ guitarists, David Gilmour is one of my faves, but I couldn’t think of a single Pink Floyd album I’d want to hear at this juncture, besides Atom Heart Mother, which is a glorious mess.

Looking over the list, I realize I’m a bigger fan of rhythm guitar than lead. This is likely because most guitar solos feel perfunctory to me and usually best heard in live situations where the band is giving the singer a breather and stretching their set. I recently had the pleasure of watching a double-disc AC/DC collection. The only drawbacks were the extended guitar solos that are mercifully more precise on LP. I love Angus Young’s playing, but I love it most when it’s compact and to-the-point and not merely giving people time to hit the head.

Don’t take this list TOO seriously. It would be very different if I wrote it in a different headspace or on another day.

As someone who grew up listening to Hank Williams, Sr. and other serious honky-tonkers from the ‘40s through the early ‘70s, I have a preference towards ‘roots’ rockers who blow past the genteel aspects of the form. I was a huge Jason and the Scorchers fan back in the ‘80s for the way they sandblasted their way through Bob Dylan’s “Absolutely Sweet Marie” and Hank Williams’ “Lost Highway.” And here veteran ‘heartland rockers’ The Bottlerockets offer up their 2015 studio album and its 2016 live counterpart. This way you can hear the differences between their studio and live approaches, which is pretty much a matter of a few decibels and some necessary looseness. Full-figured guitar chords, warm overdrives and tons of distortion where necessary.

Crap, what kind of rock ’n’ roll fan wouldn’t include the Rolling Stones on their lists? Sure, I’ve left off the Yardbirds and their trio of guitar gods, but that’s because their individual albums were spotty. The Stones, on the other hand, virtually defined the album as art form.

Since listing all their albums from ’64 through ’81 seemed, uh, overboard, I’ve broken it into two key periods. Sure, Aftermath, Beggars Banquet and Let It Bleed belong here, but Sticky Fingers is where the acoustic-electric guitar layering took maximum hold—and the Keith Richards-Mick Taylor combo appear regularly.

The Stones never went in for pure distortion, always manipulating their sound with the sweet tube overdrive that small amps bring to a studio party. Exile, of course, takes this further and to its logical conclusion, paving the way for their third or fourth wave of inspiration during the ‘punk’ era of the late ‘70s where Keith Richards and Ron Wood created a weave of cleaner tones that still brought the power. Live in ’78, they used ‘envelope followers’ and ‘phasors’ a bit heavy-handedly, but on record it’s kept tasteful.

Beware however. The most recent Universal remasters overuse the compression-loudness dynamic, rendering Some Girls and Tattoo You an exhausting experience. For some weird reason, while this dynamic is also present for Emotional Rescue, it enables listeners to best hear the rhythm section of Bill Wyman and Charlie Watts.

3) The Hold Steady — Boys and Girls in America:

Though my appreciation of the Hold Steady has waned over the years — they’ve leaned too heavily on ‘heartland rock’ where they were better as art-punks — I can’t deny the adrenaline rush of their third album. Most indie-rock moderates its use of flat-out distortion, leaving the deafening walls of sound to the punk and metal crowds, but the Hold Steady deliver genuinely anthemic tunes without turning into an ‘emo’ atrocity like the Gaslight Anthem, where you fear the singer will have a nervous breakdown before the end of the first set.

Most Black Sabbath albums have guitar tone and technique all their own. I’m boosting the first album because it’s one of the few to feature extended guitar solos (“Warning”) that contribute to the overall mood of the album. Other albums have catchier tunes — though “The Wizard” and “N.I.B.” are awesome toe-tappers — but the gestalt of this album and the cavernous reverb and foreboding vibes make the debut an essential. Simple is often best. (For nastier tones, check album #6: Sabotage.)

Speaking of simplicity, the Ramones were masters of the form. Their first four albums are all must-owns, but the first album stands alone in its commitment to the elemental form. The 40th Anniversary Mono Mix is pure excitement — a wall of unrelenting sound with nowhere to hide. The original stereo mix—with guitars on channel and bass and drums on the other— is best known for its ability to teach young, eager listeners how to play their instruments. Cool and extreme as hell as the stereo mix may be, it’s the mono mix that delivers the complete effect. (Hint: it’s not just the amp and guitar but Johnny Ramone’s relentless downstrokes that bring together his wall of sound.)

The Stooges’ self-titled debut album, produced by John Cale, features a carefully manicured sound where each instrument — guitar/bass/drums/piano note — feels walled off from the others. The alienated effect perfectly mirrors Iggy’s minimalist lyrics. The album had been written in a hurry.

With the follow-up Fun House, the band was put through the grind by producer Don Gallucci who wore the band (and slowed the band) down until he located their sweet spot. Mostly recorded live, Fun House is a showcase for guitarist Ron Asheton’s primal riffs and how those riffs play off the rhythm section.

For the band’s third album, Ron was pushed over to bass (the horror! the horror!) and new guitarist James Williamson emerged with blinding fury. Various mixes have been made ‘official’ over the ensuing decades, with David Bowie’s tinny mix being the original and Iggy’s modern mix being the one where the bass guitar tracks are found. Despite Iggy’s being the more ‘professional’ and ‘conventional’ mix, it’s Bowie’s that captures the pure madness of the times. Check the mania of “Search and Destroy” in its original incarnation as proof. Nasty, trebly tones of fuzzed out distortion. No one aims for this sound, but once you accept it, it’s forever.

7) The Jimi Hendrix Experience — Are You Experienced?:

By law I must include something from James Marshall Hendrix. It’s a great law. Anyone looking to understand the electric guitar needs to study the master. His tones aren’t always pleasing, but raunchy, ragged and complete. Hendrix is one of the very few who truly understood how to harness feedback and his energy is never more contagious than on his debut album. Later records display greater finesse and his impeccable talent at layering numerous parts, but in terms of anthemic orgasm this is it. “Manic Depression” alone is worth the price. Throw in now-standards like “Purple Haze,” “Foxey Lady,” “The Wind Cries Mary,” “I Don’t Live Today” and his brilliant slow down of the endlessly covered “Hey Joe” and you have a debut album for the ages.

Every Led Zeppelin album has something to recommend. The first album proves how much power can be unearthed using a single-coil Telecaster. II is both a continuation of the first album and a move away from it. Of all the Zep albums, it’s the one that does the least to define itself as a singular entity, yet the “Brown Bomber,” as it’s affectionately called, features several of Jimmy Page’s signature riffs that have plagued guitar stores ever since. “Whole Lotta Love,” “Heartbreaker,” “Living Loving Maid” and “Ramble On” demand that aspiring guitarists mangle the subtleties, while “Thank You” and “What Is and What Should Never Be” illustrate how years of studio work gave Page and John Paul Jones a jump on the competition. The dynamics are first-rate even when Robert Plant is taking blues-bleating to the max on “The Lemon Song.” III leaned acoustic. IV is the ‘masterwork.’

It’s highly ironic that a band much loved for their original singer, Bon Scott, would have its greatest success with an album made in tribute to his early death and therefore with a much less admired singer in Brian Johnson. Scott leers where Johnson barks, yet Back In Black, with Johnson playing Bon’s role, remains an iconic album with several ‘hits’—“Hells Bells,” “Back in Black,” “You Shook Me All Night Long”— and solid album tracks. Producer Robert John “Mutt” Lange employs his less-is-more strategy of deliberately holding back on second guitars and bass lines for maximum impact. He’s a bit more liberal with reverb than past producers but within reason.

My other choice, Powerage, is arguably Bon Scott’s finest moment with the group. Highway to Hell might be better-known, but it’s not as consistent. Anyone wondering what the band were tributing with Back in Black can go back in time to hear Scott’s creepy, nearly predator-styled vocals that were surely cause for fathers wanting to lock-up-their-daughters until the band were out of town. Brothers Malcolm and Angus Young show again how the simplest ideas are often the most powerful. No fancy pedals, no loops, no ridiculous reverbs, just pure distortion and powerchords.

The line for Eddie Hazel: Guitar Hero starts here. Few guitar solos deserve their own song but the ten-minute title track’s cry from the heart is love and desperation personified. The way the amp breaks up is all you need when explaining why tubes beat solid state, analog beats digital and why music played by skilled human beings will always destroy computers and machines.